Fed up with corporate misuse of bankruptcy laws to skirt responsibility to their victims while keeping their fortunes, Democrats announce the Nondebtor Release Prohibition Act of 2021.

The Nondebtor Release Prohibition Act of 2021 proposed by Senator Elizabeth Warren (D-MA) and four other democrats builds upon the Sackler Act proposed earlier this year by Representative Carolyn Maloney (D-NY),Chairwoman of the Committee of Oversight and Reform. The Act would prevent individuals who have not filed or bankruptcy from obtaining releases from lawsuits brought by private parties, states, Tribes, municipalities, or the U.S. government in bankruptcy by:

Unfortunately, The Act has not passed yet and will not prevent the Sackler family from exploiting the bankruptcy loopholes to gain immunity of any wrongdoing individually, or for the multiple consultants and related companies they demanded be included in the immunity shield. On September 1, 2021, U.S. Federal Bankruptcy Judge Drain approved the Sackler’s deal exchanging immunity for a $4.3 billion settlement and the Sackler will relinquish control of Purdue Pharma.

The bankruptcy deal was highly controversial. It allowed the Sackler family to keep a majority of their ill gotten fortune and they remain on the of the richest families in America. The deal also releases the Sacklers from roughly $2 trillion in pending opioid lawsuits against Purdue Pharma and the Sackler Family.

An appeal by the DOJ may be the only possibility of stopping the bankruptcy deal at this point. The DOJ, who has condemned the settlement, is undecided as to whether it would file an appeal.

Non-consensual, non-debtor releases have also been apart of other high profile bankruptcy cases including The Boy Scouts of America and USA Gymnastics, putting sexual assault victims in front of a bankruptcy judge instead of a jury.

If The Act passes quickly enough, it could prevent Johnson & Johnson (J&J) from exploiting another corporate bankruptcy loophole dubbed the “Texas Two-Step.” Women who claim to have developed ovarian cancer after using J&J’s baby products are urging congress to pass the law after U.S. bankruptcy judge Laurie Selber Silverstein denied the plaintiffs’ request to prevent the legal maneuver.

The “Texas Two-Step” would allow J&J to create a new business to take on all the liabilities associated with talc litigation and then seek bankruptcy protection for the new company leaving J&J and it’s subsidiaries financially intact.

“Make no mistake: If Johnson & Johnson believes it can dance away from its responsibility to ovarian cancer victims—many of them African American women—by doing a Texas two-step, it’s sadly mistaken,” lead attorney, Andy Birchfield, said in an emailed statement.

Filings with the Securities and Exchange Commission show J&J estimate their talc liabilities to be an estimated $3.9 billion.

Elizabeth Warren (D-MA) has long fought to end Wall Street corruption at the expense of employees and other victims, while billionaires and corporations get away with hiding funds and assets that should be divided up between the plaintiffs, victims and debtors. Prior to the Nondebtors Release Prohibition Act of 2021, the Massachusetts senator and presidential candidate proposed the Stop the Wall Street Looting Act (SWSLA) in 2019. The act did not pass and some critics believe it did not go far enough to stop corruption. Had it passed, it would not have prevented the Sackler Family from negotiating their immunity deal in bankruptcy court. However, it would have been a good start.

The Nondebtors Release Prohibition Act of 2021 has strong support in the House, by attorney generals, activists, and multiple organizations that deal with the aftermath of opioid addiction. You can find a list of the bill’s many supporters at sackleract.org.

Also read The American Prospect’s “How Do You Solve a Problem Like the Sackler?” Writer Maureen Tkacik does an excellent job advocating passing The Act as judges have “grown accustomed to issuing get-out-of-litigation cards to corporate looters in bankruptcy court.”

“Bankruptcy is there to help companies in trouble. And in return for that help, they put everything they own on the line to help the people they’ve injured. Over time, rich people in giant corporations have figured out how to game the system. Now, billionaires like the Sacklers want to get the benefits of bankruptcy while they keep their assets secret. That’s wrong. And this law would stop that,” said Senator Warren.

“After my lawsuit exposed the Sacklers’ role in the opioid epidemic, the Sacklers hid behind a corporate bankruptcy to avoid accountability.  We need common sense legislation to stop that abuse.  The public deserves a justice system that delivers justice – not special protection for billionaires. I applaud Senator Warren, Senator Durbin, Chairman Nadler, Chairwoman Maloney, and their colleagues for standing up for what’s right,” said Massachusetts Attorney General Maura Healey.

“I am pleased to join my colleagues in introducing this important legislation that builds on my SACKLER Act by closing loopholes in bankruptcy law and promoting accountability for bad actors,” said Rep. Maloney, Chairwoman of the Committee of Oversight and Reform.  “For too long, the unfettered abuse of non-debtor releases has allowed wrongdoers to evade responsibility for their actions.  As Chairwoman of the Committee on Oversight and Reform, promoting accountability for America’s opioid epidemic has been one of my top priorities.  The Sackler family directed Purdue Pharma to flood our communities with dangerous OxyContin.  They created and fueled a national public health crisis that has claimed nearly half a million lives.  It is imperative that Congress act quickly to prohibit the abuse of non-debtor releases and prevent bad actors—including the Sacklers—from evading accountability.”

How Do You Solve a Problem Like the Sacklers?, The American Prospect, July 29, 2021

This is the latest news article. 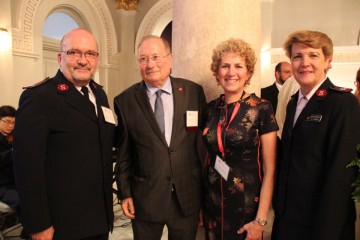