In a 6 to 1 decision, the Pennsylvania Supreme Court opened the door for thousands of pending Risperdal injury cases to proceed to trial. The seven-justice court ruled that a jury must decide, on a case by case basis, at which date the plaintiff should have had knowledge that the ingestion of Janssen Pharmaceuticals drug Risperdal caused the growth of female breast tissue beginning a two-year limit to seek restitution. Janssen Pharmaceuticals is a subsidiary of Johnson & Johnson.

Plaintiffs Jonathan Saksek and Joshua Winter had taken and subsequently discontinued use of the antipsychotic drug as children, years before the FDA required Janssen the drug manufacturer to add a black box warning regarding possible growth of breast tissue growth in young boys to the Risperdal label in 2006.

Both plaintiffs gained excessive weight, another side effect of Risperdal, and therefore did not realize the growth was in fact permanent breast tissue.

Lower courts had referred to the addition of the 2006 black box warning to the Risperdal label, news reports, journal articles and even lawyer advertising that warn of the risks of taking Risperdal in 2009, as the milestone in which the statute of limitations begins. However, the PA Supreme Court majority disagreed.

“The mere experience of a physical condition does not trigger any obligation to actively seek out further information, including whether it is the result of another person’s conduct.”

“The mere experience of a physical condition does not trigger any obligation to actively seek out further information, including whether it is the result of another person’s conduct,” wrote Justice Christine Donohue for the majority. “If, as Winter and Saksek contend, they believed that their condition was merely the result of weight gain rather than a pathological endocrine disorder caused by the conduct of another, then the requirement to exercise due diligence may never have been awakened.”

Up to 20% of the 6,600 cases in the consolidated Philadelphia mass tort were at risk of being time barred but are now ready to move forward to trial.

“Today’s ruling reinstates the legal rights of thousands of people with valid Risperdal claims,” plaintiffs’ attorneys Thomas Kline and Charles “Chip” Becker said in a statement Wednesday. “Combined with the affirmance of three jury verdicts and the reinstatement of the right to punitive damages, this litigation now has all of the legal impediments resolved, enabling a pathway forward for full compensation for those who were injured as a result of Johnson & Johnson’s illegal off-label promotion and marketing of a powerful antipsychotic adult drug to children.” 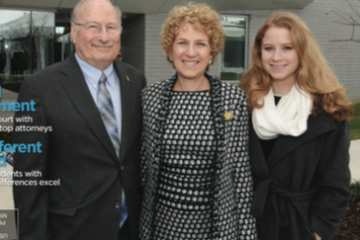