The firm has been at or near the top of the list for five of the last six years. This year the firm pulled both the #6 and #11 Top Settlements spots based on its legendary strength in whistleblower “qui tam” lawsuits.

The #6 ranking: in September 2014, the Sheller whistleblower team announced a $58.9 million settlement with Shire Pharmaceuticals [United States ex rel. Torres et al. v. Shire Specialty Pharmaceuticals et al., No. 08-4795 (E.D. Pa.)] over off-label marketing of ADHD drugs Adderall and Vyvanse. ADHD is a chronic condition in children and adults, according to the Mayo Clinic, marked by difficulty sustaining attention, hyperactivity and impulsive behavior that can affect the ability to function in everyday life. Experts at Mayo say that treatment will not cure the condition, but that it can help with the symptoms. The FDA cautions doctors and patients, however, on their approved labeling of Adderall and Vyvanse.

The lawsuit claimed that Astellas marketed Mycamine for off-label use in children, thereby increasing sales while making illegal claims for reimbursement from the government. “Children were put at risk of cardiac arrest, liver failure, kidney and blood disorders and other adverse effects,”  said Stephen Sheller in an interview with The American Law Journal television program. “There are children out there that may have these problems whose parents don’t know that the drug may have caused serious, potentially life-threatening conditions.” See Sheller Whistleblower Team Announces Astellas Pharma Mycamine $7.3 Million False Claims Act Settlement,

To date, these top ranking settlement figures, added to historic settlements of recent years, total over $6.4 Billion in Whistleblower Settlement & Recoveries on behalf of the U.S. Government and taxpayers since the year 2009 alone. 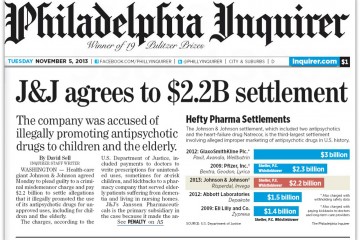